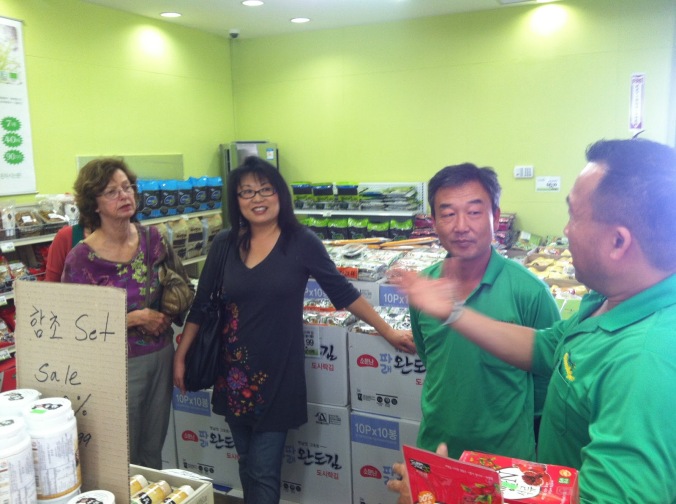 On Sunday, April 28th, 10 of us met in Koreatown for an insider’s view of where to get the cleanest and most nutrient-dense traditional Korean food.  Escorted by fellow member Jaye Park, our first stop was Greenlife+, a small Korean market specializing in traditional Korean foods, beverages, and condiments.  We spent over an hour there, touring the market with Jaye, business owner Andrew Cho, and sales manager Young H Lim.

Spending time at each small section of the store, Jaye enlightened us about the natural and traditional food movement going on throughout Korea.  She occasionally took breaks to speak in Korean with manager Young H Lim who was very knowledgeable about the healing properties of many different Korean foods.

Most importantly, Jaye explained that all of the products at the market came from specially-designated green areas of Korea where only the most traditional and clean farming practices are allowed.  Some of the products included traditionally-fermented soy sauce and fish sauce with no wheat, GMOs, additives, or preservatives, numerous health elixirs of fermented fruits and vegetables, a wide variety of seaweeds for all different purposes, and a salad bar of fermented wild-caught seafoods.  Even the “farmed” seafood was practically wild, as it was collected from natural ocean preserves.  The Koreans are so in tune with natural foods, that all GMOs are banned.  So if you want pure clean, GMO-free Asian food, then try some traditional Korean food, and add Greenlife to your list of favorite markets.

In many traditional cultures, especially Korean, it seems like most foods are considered for their health benefits first.  Sometimes I think we in the western world are truly anomalous when it comes to how ignorant we are of the intimate connection between the earth, our foods, and our bodies.  Most of us proudly profess to eat for taste alone, but little did we know that if we ate for health first, then our food would always taste great.  That’s because whenever you satisfy your cravings with something your body truly needs, nothing tastes as divine as that particular food at that particular moment!  If only western industrial food producers would tune in to this undeniable truth!

After our tour of traditional Korean foods at Greenlife+, we went on a tour of Koreatown Galleria Market, a large Korean supermarket that sells a wide variety of both traditional and modern Korean foods.  Walking through the supermarket we found ourselves attracted to many non-western varieties of produce, including various types of sweet potatoes, a variety of edible daisy greens, Korean pears and melons, dried jujubes, and other traditional specialties. 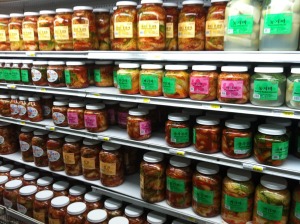 The supermarket offered everything from highly processed Korean junk food to vast quantities and varieties of kimchee, and a large section of fresh, wild-caught and live seafood.  A more or less typical modern Asian supermarket, we had a good time exploring both its traditional and modern processed food options.  By this time of course, we had already all finished our shopping at our previous and much greener stop!

Finally we arrived at O Dae San Korean BBQ Restaurant, where we were graciously received by owner and restauranteur, Hye Young Oh.  As she escorted us to our table, we stopped by a collection of 3-foot-tall Korean clay fermenting pots where we got a lesson about the health benefits of fermenting in clay.  Jaye explained that in a study of the nutrient density of fermented foods, it was discovered that the food prepared in traditional clay pots exceeded by far the nutritional value of the same foods fermented in pots of glass, stainless steel, or plastic.  We also learned that unfortunately, after our host spent a large sum of money purchasing and shipping the pots from Korea to LA, expressly for making kimchee and other specialties for her restaurant, our ever-knowing health authorities determined that the practice of preparing food in clay vessels was unsanitary.  So Hye Young Oh was forced to abandon the practice and use plastic.

When it comes to traditional nutrient-dense foods, it seems like we can never escape the detrimental effects of our ill-guided political regulatory system.  It would be so nice to someday just once attend a traditional foods and farming tour without encountering any political interference.  If traditional food preparation practices were so bad for us, then maybe the human race wouldn’t have made it this far, and maybe our collective health wouldn’t have deteriorated so much after abandoning those practices!

Soon we were all seated at a long table in a covered, open-air section of the restaurant.  For our first dish, we each received one half of a baked winter squash stuffed with a mixture of organic sprouted wild rice, black beans and roasted chestnuts.  This was accompanied by a fresh organic salad seasoned with organic rice wine vinegar and organic olive oil, and a selection of 5 different side salads to share including kimchee, fermented sprouts, fresh broccoli, and a mayonaise-dressed mixture of fresh vegetables.  The side salads were available as condiments throughout the meal.  We were also offered soufflé-style steamed eggs in small red clay pots, vegetable pancakes, and some wonderful sesame oil and ground fresh wild sesame seeds for dipping.  This would have been more than enough to fill everyone up, but we knew more food was on the way, so we paced ourselves! 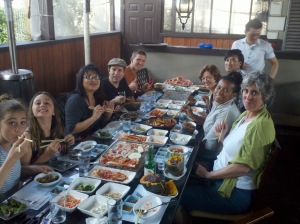 Next came the thinly sliced fresh duck meat, laid out on special solid crystal rock cooking trays, tilted sideways so the duck fat would run down to the bottom of the tray.  Traditional Korean BBQ sometimes uses slabs of rock for cooking, but in this case, special crystal rocks were chosen for the healing frequencies they are said to emit.  The duck was placed raw at the tops of the trays, while various accompaniments were spread out below to capture to melting duck fat.  These included a delicious spicy and tender kimchee, as well as large Asian mushrooms and freshly sliced garlic.  The waiters showed us how to wrap the duck, mushrooms, and garlic in the kimchee, and then dip it in sesame oil and ground sesame seeds. It was heavenly!  Later we were offered cruditées of organic baby lettuces and dandelion leaves to add some raw crisp flavor to our duck meat wraps.   The meal continued for several hours as the trays of Korean BBQ specialties kept coming.

Surprisingly, in spite of the huge volume of food, I don’t think any of us ever felt too full.  We were just happily and comfortably satisfied with the delicious meal.  In the end, any unfinished rice, garlic, kimchee, and mushrooms were stir-fried on the solid crystal rock cooking trays with the remaining duck fat and duck meat, sprinkled with the rest of the sesame oil and ground wild organic sesame seeds, and divided amongst the guests to take home.

All in all, a wonderful experience!  The restauranteur and her staff made us feel like guests at a royal banquet, and the food was full of flavors to be remembered.

Thanks to everyone who made this field trip to Koreatown possible, including Greenlife+ owner, Andrew Cho, restauranteur and owner of O Dae San, Hye Young Oh, and especially our own Jaye Park, who was not only a great tour leader, but also spent many hours organizing the trip and assisting with the meal planning.

As a nutritional therapist, geographer, and your founding chapter leader, I highly encourage you to explore traditional foods, especially from other cultures.  And if you have a passion for any cultural heritage and know where to find good traditional food that represents that culture, please let us know.  The LA area is so rich with ethnic groups and foods from other cultures, why wait for an international vacation when you can find just what you’re looking for right in our own back yard?

Thanks again to everyone who attended this deliciously fun and educational excursion through the world of traditional Korean food!