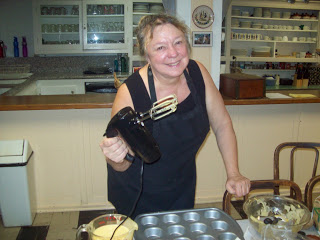 Our potluck dinner for the month of August focused on gluten and grain free fun desserts. As people are becoming more aware of Celiac disease and gluten sensitivity plus of the hybridization of modern wheat, there’s a growing interest in learning how to bake gluten free foods. Additionally, gluten and grain free dishes are also GAPS, paleo, and primal friendly.  Suzanne Peters teaches classes about how to make gluten free treats. She shared her knowledge with the Weston A. Price Pasadena Chapter this month by showing us a demo at the Nature Friends Clubhouse.

As always, the meeting began with the potluck dinner. Many people followed the theme by bringing their own gluten free dishes, such as hamburger patties sans buns, spaghetti squash, and frozen grapes. Therese Cardinali, who also has knack for gluten free baking, brought in some delicious lemon squares based on a recipe from The Gluten Free Almond Flour Cookbook, but used coconut oil where the recipe called for grapseed oil and added organic low-glycemic coconut nectar instead of agave.  Also, Suzanne brought in some of the coconut flour muffins she’d later show a demo on for us taste.  She had both the sweet vanilla and the savory muffins made with homemade chicken broth, green onion, and garlic.

After the dinner outside in the nice August weather, people gathered inside to watch Suzanne as she explained the secrets to baking the best tasting gluten and grain free desserts. Before getting into the demo, Suzanne gave us a little background about how she’s been living a gluten free lifestyle and has become grain free as well more recently.  She read a piece from the Wheat Belly Cookbook about the problems the gluten from modern wheat is causing due to its hybridization.  Questions arose as to why wheat became hybridized. Suzanne explained that this was so the crops could grower fast and the farmers would have more yield.  It also made the wheat easier to rise for baking purposes.

Suzanne handed out a recipe on how to bake the vanilla muffins and began to show us the process she goes through. She had all of the ingredients and baking equipment laid out on the table.  Another important thing she emphasized is that every type of flour has different requirements on how to bake it.  The muffins she was making used coconut flour.  If she were baking ones with almond flour, the instructions would vary in terms of what and how much ingredients would need to be used. 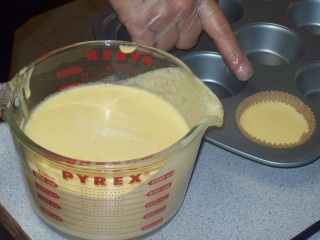 Suzanne said one of the keys to baking the vanilla muffins was to use six eggs, which are more eggs than are typically used for muffins. Along with the eggs, vanilla extract and either honey or money syrup are added.  Suzanne used honey, so the the muffins could be GAPS friendly.
For oil, palm shortening, butter, or coconut oil can be used.  In the demo, Suzanne brought in palm shortening.  Many people weren’t aware that the Spectrum palm shortening she was using is available at most Whole Foods Markets.  Palm oil, due its controversy, is often hard to find.  Others that had seen the product in stores were confused, because it says vegetable shortening on the container, leading them to believe it’s made from genetically modified canola, soy, or corn.  But the product consists of 100% palm oil.

After Suzanne mixed all the ingredients together, she then poured them into the baking cups.  She passed around the baking to emphasize the importance of using ones that are toxin free.  The cups she had were from If You Care and were unbleached and chlorine free.  She also showed the mold that the cups were placed in.  Suzanne used a aluminum mold and explained that aluminum is okay in this case, because the batter doesn’t touch the aluminum as its protected by the cups that they’re poured into. 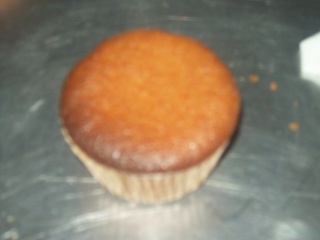 One final thing that Suzanne talked about when it comes to baking gluten and grain free muffins is how much batter to pour into the cups.  If you want to have muffins tops, then you need to pour the batter close to the top of the baking cup.  If you don’t want the tops, then you can pour less batter into the cups, leaving some space in them.
Many thanks to Suzanne for sharing with us the key to make great tasting gluten and grain free desserts.  As there’s more demand for gluten and grain free products, it’s an invaluable gift to not only to know how bake them, but how to bake them right.
For those more interested in learning about grain free baking, Suzanne is offering a two part class.  The course will be held on Thursday September 19, 2013 from 7-9:15 PM a the Unity of Pasadena, located at 3053 Del Mar Blvd. Pasadena, CA 91107.  The cost is $35.00 ($10 of which goes to the cost of the materials).  Plus, you’ll get to take home bread, cookies, and muffin recipes, a resource sheet for where to find the ingredients, and a small box of gluten free, grain free, sugar free sweat treats.
Everyone that attended the potluck had great pleasure in seeing Suzanne give her gluten free baking demo.
Have a great September and join us again on September 26th as we have another movie night. This time we’ll be watching the documentary $tatin Nation, which explores the lies told about cholesterol and the dangers of the drug that have created a multi-billion dollar industry.
For a preview of what the documentary is about and what inspired director Justin Smith to make the film, listen to his interview on the Appropriate Omnivore podcast, which will be released on September 9 on the podcast page, iTunes, and Stitcher.
Your Chapter Co-Leader,
Aaron