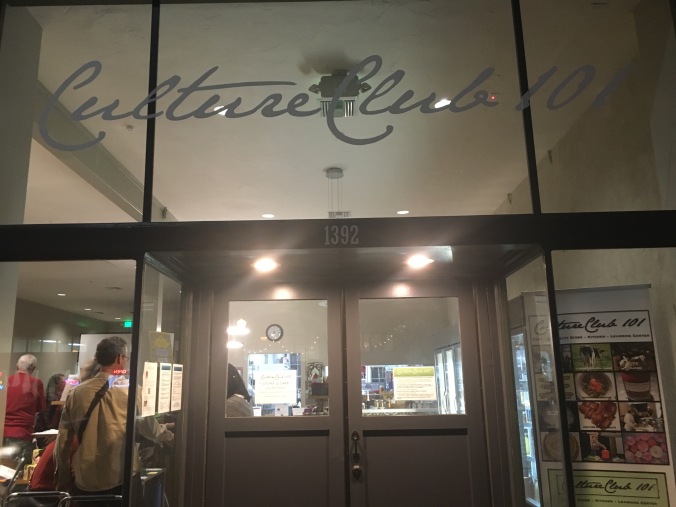 At the end of 2016, our long time chapter member Elaina Luther reopened her restaurant/store Culture Club 101 in its new location. Back in November, we held a chapter meeting there. We returned to Culture Club 101 for our first potluck of 2017 for what will also be the meeting place for February.

A large group of people to attended, including many first time members, and brought a great variety of nutrient dishes.

Our speaker for the night was Randy Ramsley of Mesa Market Farms. I had the pleasure of meeting Randy two years ago at one of our potlucks and trying his goat meat. (A Weston Price chapter meeting might be the only place where you don’t sound weird for wanting to eat goat.)  Since then, Randy has a been a regular attendee.

I was familiar with what Randy produced on his farm, but didn’t know much about his background. so I was delighted to learn more. Randy began recalling reading a magazine article about organic farming and how it was being plowed under by the industrialized farm. He went on to talk about how he started a business that eventually led to providing him the money and resources to start his organic farm. Along his path to his ultimate vision, he ran into several people that taught him some timeless ancient wisdom and knowledge. Randy then moved to the main focus of his presentation, which was that many of us fail to think about how we not only need a healthy physical diet, but we also need a healthy spiritual diet.

Randy explained that mind, body, and spirit all play a part in eating a nourished and well digested diet.  Randy also pointed out that spiritual doesn’t necessarily mean god-fearing or religious, but in the sense of recognizing a wonderfully ordered and omnipotent system that spreads throughout the universe. He strives to understand and be conscious of the system. Randy says we’re always in the Church of life that supplies us with the food we need to physically and spiritually participate in order to thrive.

Randy then talked about the famous religious teachers of Buddha and Jesus. He noted that when they were leading their followers, food was truly organic. Randy said for that reason Buddha and Jesus didn’t need to lecture about a nutrient dense diet. But in today’s industrialized world, the nutrients needed for optimal digestion are often lacking.

The last part of Randy’s presentation was about the energy we get from food. He says we eat the energy of the sun as the energy goes from the sun to the plants (and possibly to the animals that eat the plants) and then to us. Randy says we’re essentially eating light and energy of the universe. The problem with the industrialized foods that are available is their energy is minimized by the unnatural ways they’re produced.

Randy concluded that as we face all of the problems of the big ag, we need to do our best eat wholesome, promote clean air and a natural environment, and learn to properly digest the food of impressions. He says we’re already complete, whole, and perfect no matter what disease we believe we’re experiencing.

As everyone in Weston Price is about taking control of their health and avoiding processed food, Randy’s words were inspirational and relatable to everyone’s mission.

For those of you that missed Randy Ramsley’s presentation or would like to watch it again, it can be viewed here: